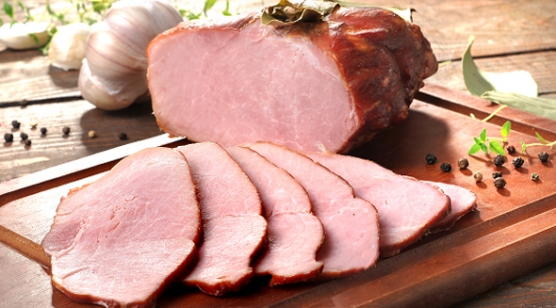 This study evaluated the efficacy of organic acids applied singly or in combination as postlethality dips to sliced uncured turkey deli loaves to inhibit the growth of Listeria monocytogenes (Lm) Scott A. Treatments consisted of sodium lactate (SL; 3.6%), potassium lactate (PL; 3.6%), sodium citrate (SC; 0.75%), a combination of SL and sodium diacetate (SDA; 0.25%), and a combination of SL/PL/SDA, alongside appropriate negative and positive controls. Products were inoculated with 104–105 CFU/mL streptomycin-resistant (1500 μg/mL) Lm Scott A prior to treatment. Products were then stored at ~4°C and sampled at 0, 7, 14, 21, 28, 42, and 56 d. The SL/SDA combination applied to turkey slices extended the lag phase through 21 days of refrigerated storage. Numbers of Lm Scott A rose by 0.7 log10 CFU/g through the 56 d storage period. The application of the SL/PL/SDA treatment to turkey product surfaces extended the lag phase through 42 d, with pathogen numbers declining after 21 d. Combination organic acid dips prolonged the lag phase for 2 to 6 wk on turkey product surfaces and can be useful as antimicrobial agents for Lm control on postlethality exposed sliced deli products.


The US Centers for Disease Control and Prevention (CDC; Atlanta, GA) [1] reported 1651 cases of human foodborne listeriosis from Listeria monocytogenes (Lm) which occurred from 2009 to 2011, with a case-fatality rate of 21%. Nevertheless, the US Department of Agriculture Food Safety and Inspection Service (USDA-FSIS) has reported a decline in the prevalence of Lm in ready-to-eat (RTE) meat and poultry products (including deli products) collected through its sampling program, from 4.61% in 1990 to 0.27% in 2011 [2]. The USDA has also recently provided guidance for the control of Lm growth on RTE meats, including the proper application of antimicrobial agents (AAs) in the manufacturing of deli products [3]. Antimicrobial hurdles consist of a combination of several processes and/or interventions that result in a growth-limiting impact on pathogenic bacteria. Commercial AAs may contribute to the hurdles by reducing the water activity () of foods, lowering product pH, REDOX potential modulation, or combination of these and other processes [3–5].

Organic acids and their salts applied to RTE deli products either in the product formula or to the product’s surface postlethality and are known to possess Lm growth-inhibiting capabilities. Islam et al. [6] tested the ability of organic acid marinades applied to turkey frankfurters as postcook dips to reduce Lm growth, reporting reductions of 1.0 to 2.0 log10-cycles compared to nontreated controls. Carroll et al. [7] evaluated the addition of organic acid marinades to turkey deli loaf formulae and found the Lm lag phase was extended through 56 days on slices treated with a 3.0% sodium lactate and 0.25% sodium diacetate combination. Porto et al. [8] concluded that incorporation of potassium lactate (PL) into vacuum-sealed frankfurters stored at 4°C and 10°C provided listeriostatic effects, extending the lag phase for the duration of the study (90 and 60 days, resp.) compared to a frankfurter without PL. Nuñez De Gonzalez et al. [9] reported an overall growth inhibition of ≤2.0 log10 CFU/frank in Lm counts on beef frankfurters formulated without or with 3.3% PL, and surface dip-treated with potassium lactate (3.3%) or lactic acid (3.4%) over 12 wk refrigerated storage. Barmpalia et al. [10] found that growth was inhibited in frankfurters formulated with lactate and diacetate and then treated with lactic or acetic acid postcook dips.

Streptomycin resistance () was induced through exposure of the organism to antibiotic in medium. L. monocytogenes Scott A cells were gradually exposed to increasing concentrations of streptomycin in BHI broth and BHI agar according to previous procedures [11]. A stock solution was prepared by mixing streptomycin sulfate (Sigma-Aldrich Co., St. Louis, MO, USA) in sterile distilled water with stirring and gentle heating when necessary. The solution was filter sterilized into 250 mL bottles (Pyrex, Lowell, MA, USA) using a 60 mL syringe filter (0.2 μm pore diameter) (VWR Int.). This then was added to sterilized medium in a laminar flow hood to the desired exposure concentration. Pending survival at the initial exposure concentrations (0.2, 1.6, 6.4, and 12.8 μg/mL) antibiotic concentration applied in broth and agar was systematically doubled to increase Lm resistance, until a maximal resistance of 1,500 μg/mL was obtained. Desired cultures were subsequently frozen in sterile 1.5 mL microcentrifuge tubes and stored at −80°C until required for use. The strains were initially incubated in 10 mL of BHI broth with 10% glycerol solution at 37°C [11]. From this, 300 μL was added to a 700 μL volume of glycerol in microcentrifuge tubes and vortexed prior to freezing. A sample of each strain was subsequently thawed and cultured to determine bacterial survival following the procedure

The Lm Scott A culture was passed at least three times before inoculation to allow for revival as described above. The Lm Scott A stock was decimally diluted from inoculated BHI broth into the necessary sterile test tube containing 9.0 mL sterile PBS to generate countable plates (25–250 CFU). Each dilution was spread in duplicate on 15 × 100 mm Petri plates containing BHI agar and incubated overnight at 37°C. The incubated plates were enumerated with a photographic ColorCount recognition technology using the count instrument (Spiral Biotech). The working stock solution was prepared to target 105 CFU/g on turkey slices. Each slice () was inoculated with 0.1 mL stock culture using 10 μL aliquots. Disposable, sterile 10 μL volume inoculating loops (VWR Int.) were used to spread inoculum across the surfaces of meat slices. This was performed on a single side of the slice. Inoculated slices were set aside for 2 min to allow for bacterial attachment. Transfer of slices to segregated stations was conducted using ethanol/flame-sterilized forceps.

Packaged slices were removed from refrigerated storage for sampling on days 0, 7, 14, 21, 28, 42, and 56. Sterile forceps were used to divide the slices into individual filtered stomacher bags. Each bag was filled with 50 mL sterile PBS and homogenized using a Stomacher 400 Circulator (Seward, West Sussex, UK) for 2 min at 245 rpm. Decimal dilutions were prepared prior to inoculation onto streptomycin-loaded (1,500 μg/mL) BHI agar-containing Petri plates. Samples were incubated for 48 h at 35°C prior to colony enumeration. Duplicate plate counts were taken, subjected to log10-transformation, and averaged. The average slice weight was considered with 50 mL PBS added to create the first dilution.

The log10/g average plate counts from each of three inoculated slices treated in identical fashion with one of the 7 treatments at each of the seven sample points (0, 7, 14, 21, 28, 42, and 56 days) over three identically completed replicates () were subjected to statistical analysis using the PROC GLM procedure of SAS v11.0 (SAS Institute, Inc., Cary, NC). Separation of statistically differing means was carried out within a sampling period across treatments using Duncan’s Multiple Ranges Test.

The potential for Lm Scott A survival on food processing machinery, environmental niches, and fixtures from processing facilities is of great concern as cross-contamination of deli products can occur during postlethality handling [13]. The use of postlethality antimicrobial dips could provide a barrier in the control for L. monocytogenes growth inhibition.

The inhibition of Lm Scott A on uncured turkey loaf slices by postcook organic acid dips is depicted in Figure 1. Combination treatments of SL/SDA and SL/PL/SDA suppressed Lm Scott A cell growth postprocessing (21 and 42 d, resp.) on turkey deli loaf slices compared to the other treatments on those sampling days (). SL and PL treatments () inhibited growth at day 7 when compared to the pathogen-inoculated positive control and the SC-treated slices. However, at 28 days’ refrigerated storage no differences were observed between the control and the SC treatment. Throughout the experimental period, Lm Scott A counts on SC-treated product did not differ from the inoculated positive control on any sampling day () (Figure 1). Overall, combination of SL (3.6%) plus SDA (0.25%) or SL (3.6%) + PL (3.6%) + SDA (0.25%) demonstrated inhibition of Lm Scott A growth on post-dipping refrigerated turkey deli slices over 56 days’ storage. 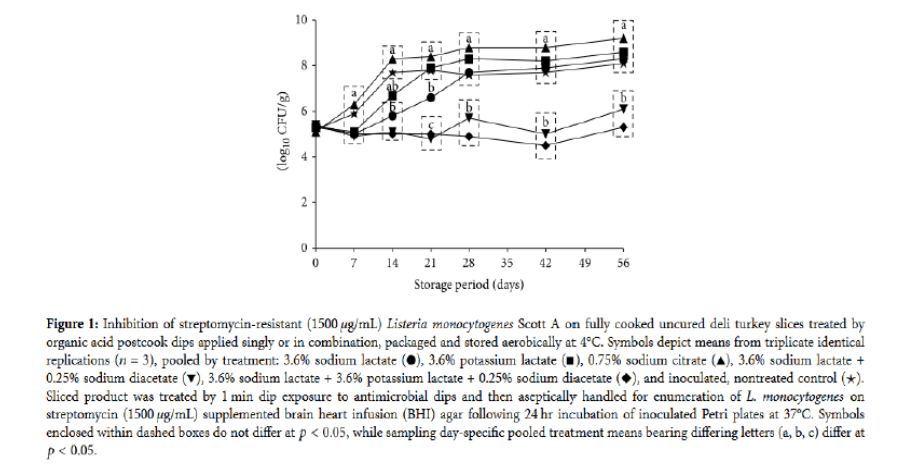 Antimicrobial activity of weak organic acids, including lactate, citrate, and acetate, is generally attributed to penetration of the undissociated acid molecule through the cell membrane, with resulting acidification of the cytoplasmic space and activation of active processes to reestablish internal pH homeostasis [14]. Weak organic acids such as lactic and citric acid are favored for intracellular permeability due to inherent hydrophobicity and the resulting interactions with the cellular lipid bilayer. This may result in cell damage, death, or exhaustion due to expenditure of energy and resources to exclude the acid. Additionally, lactic acid has been reported to permeabilize the outer membrane of some Gram-negative organisms, and multiple weak organic acids are reported to exert antimicrobial activity in the form of DNA degradation or ribosomal attack via the dissociated acid anion once the cytoplasm is reached [15, 16].

Extensive published research supports organic acids and their salts as effective AAs in poultry deli product formulae. However, knowledge of these AAs as postcook dip solution ingredients and their effects on Lm in poultry deli meat slices is not as extensive [8, 13, 17–20]. Lianou et al. [21] simulated in-plant cross-contamination and found that combinations of commercial lactate (1.5%) and diacetate (0.05%) formulated into uncured turkey breast reduced Lm growth rates compared to untreated turkey breast over 12 d of storage at 7°C. Carroll et al. [7] found a combination treatment of 3% SL and 0.75% SDA applied to inoculated, vacuum-packaged turkey deli slices extended the lag phase of Lm through 63 d of storage at 4°C. The combined application of 2.0% SL + 0.25% SDA via edible coatings on fully cooked turkey breast stored at freezing resulted in enhanced reduction in Lm numbers versus coatings formulated with SL or SDA alone [22]. Collectively, combined application of lactate and diacetate solutions produces a greater antilisterial effect on fully cooked poultry deli products subject to Alternatives 1 or 2a of Title 9 of the US Code of Federal Regulations (CFR) §430. Samelis et al. [23] noted that combination treatments of 0.25% SL with 0.25% SA, SDA, or glucono-δ-lactone applied to frankfurters extended the Lm lag phase throughout 120 d at refrigerated storage. Similarly, Palumbo and Williams [24] reported that inoculated, vacuum packaged frankfurters treated with a combination of 2.5% citric acid and 2.5% acetic acid dip suppressed Lm growth over 85 d at refrigerated (5°C) storage.

L. monocytogenes isolates are reported to vary in their sensitivity to antimicrobial exposure, including exposure to organic acids. Brandt et al. [25] reported Lm Scott A exhibited greatest sensitivity to nisin with a minimum inhibitory concentration approximately half that of other isolates tested. Similarly, Cheng et al. [26] reported that Lm M7, an avirulent isolate, demonstrated significantly slower growth and in some instances failed to grow and replicate in liquid medium infused with acetate or lactate to pH 5.5. Authors hypothesized that deletion of a sigma factor in the avirulent M7 Lm isolate was responsible for loss of pH homeostasis maintenance capacity and survival in acid-infused medium. The isolate used in the current study was not subjected to genome recombination procedures to weaken its capacity to tolerate tested organic acids, although its inhibition may not be identical to all Lm isolates, particularly in situations where acid tolerance is increased via prior sublethal organic acid exposure [27].

FSIS regulations for processing facilities producing RTE deli products require the development of interventions producing L. monocytogenes control measures in HACCP, SSOP, and/or other prerequisite programming systems. Organic acid combinations (SL + SDA or SL + PL + SDA) applied in postlethality dips inhibited the growth of L. monocytogenes Scott A on RTE deli turkey slices and can be applied as part of a multihurdle food safety system to extend the inhibition the growth of L. monocytogenes Scott A in sliced turkey deli products packed and held at refrigeration temperatures. These data can provide supporting information within a Listeria control plan for products manufactured under Alternatives 1 or 2b when developing postlethality interventions for processors of aerobically packed RTE deli products.